Review: Shatter Me by Tahereh Maffi 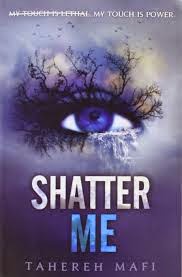 Juliette hasn’t touched anyone in exactly 264 days.The last time she did, it was an accident, but The Reestablishment locked her up for murder. No one knows why Juliette’s touch is fatal. As long as she doesn’t hurt anyone else, no one really cares. The world is too busy crumbling to pieces to pay attention to a 17-year-old girl. Diseases are destroying the population, food is hard to find, birds don’t fly anymore, and the clouds are the wrong color.The Reestablishment said their way was the only way to fix things, so they threw Juliette in a cell. Now so many people are dead that the survivors are whispering war – and The Reestablishment has changed its mind. Maybe Juliette is more than a tortured soul stuffed into a poisonous body. Maybe she’s exactly what they need right now.Juliette has to make a choice: Be a weapon. Or be a warrior.

Shatter Me was the first book I finished in 2015 and I loved it! It was an amazing dystopian with a paranormal twist full of action, suspense, romance and well-written characters.

When it came to the romance, it was really sweet and at times even a little bit steamy. Juliette and Adam definitely had an undeniable connection from the start of the novel that got stronger with each passing chapter. But the book was also full of twists and surprises that kept me at the edge of my seat holding my breath! In truth, though, what first captured my attention about Shatter Me was its writing.  I completely fell in love with it! Tahereh Maffi's writing is incredibly lyrical, beautiful and unique! It really helped capture Juliette's emotional state in the book.

Juliette is a very strong and complex character. Declared as a monster by society and locked away in isolation for the better part of a year she's in a turmoil of emotions. In a way she's broken and lost but at the same time, in many parts of the book, you can really see the strength she carries. She's definitely a very inspiring character!

I liked Adam. I really did. I didn't love him, but I liked him. He was very kind to Juliette and in a way he was what kept her from completely going insane, her rock, even though he started out as a huge jerk... Another thing about him was his devotion and love for his little brother. It really moved me in many ways.

Warner was.... well, he was truly something else. I know that about 80% of the people who've read the Shatter Me trilogy are completely in love with this character but for now, I don't really see it... Maybe it's because it's the first book? But even though, at least for now, he is not the kind of character you fall in love with he was a great antagonist.  He was cruel at times and his way of thinking sometimes made me think he was also a bit mad but I have to admit he is a fun character to read about. He certainly has many layers I can't wait to explore in the next books.

Another character that really stood out for me was Kenji. Despite not appearing much in the first book, Kenji certainly made a great impression on me. He was, the least to say, hilarious! On the few pages he was in I was constantly laughing out-loud! I'd really like to see more of him in the next instalments!

Overall, this was an amazing read and a book you really should pick up if you're into the dystopian genre!