Review: Anna and the French Kiss by Stephanie Perkins 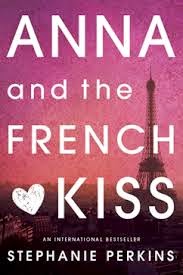 Anna is looking forward to her senior year in Atlanta, where she has a great job, a loyal best friend, and a crush on the verge of becoming more. Which is why she is less than thrilled about being shipped off to boarding school in Paris--until she meets Étienne St. Clair. Smart, charming, beautiful, Étienne has it all...including a serious girlfriend.

But in the City of Light, wishes have a way of coming true. Will a year of romantic near-misses end with their long-awaited French kiss?

After reading Anna and the French Kiss I am convinced that Stephanie Perkins may just be the queen of contemporary novels. This book was amazing! Cute, light-hearted and funny, it gave me butterflies and left me grinning like an idiot!


I loved Etienne and Anna's relationship! They become fast friends from the beginning of the book  and through out its course they quickly turn into best friends. Their interactions were often 'laugh out loud' hilarious and very sweet! But even though the romance was incredibly cute it was also a bit frustrating. We know that Etienne has a girlfriend but even when he realises he has feelings for Anna he still refuses to break up with her because,  after a heart-breaking revelation about his mother he is afraid to be alone. And even though I understood him at some point, I was still a bit frustrated with his choices, as was Anna.

I think Anna was a great main character. She was funny and flawed but she was the kind of girl that, in the end, recognised her own faults and tried to make things right. (Spoiler) Like with Juliette. When she found out she was with Trip she cut all ties with her but, at the end of the book, she understood why she did what she did because she had done the same thing to Mer.
She wasn't there, they fell in love and Juliette didn't how to tell her. I really respected Anna when she wrote that letter back to her. (End of Spoiler)

And let's not forget Etienne. How could anyone not like Etienne St. Clair? He is witty, charming and British!


.... I seem to have developed a thing for British guys lately...

Okay, confession time. I have been studying French for the past 4 years or so and even though I love the language, I've never been really interested in the country. Until this book. I felt like Anna and the French kiss was my personal tour guide of Paris and even though it didn't show me everything it did spark my interest for the City of Lights. The Louvre museum, the point zero, all those little theatres.. It would be a dream come true to one day visit them myself!

Overall, Anna and the French Kiss was an entertaining, cute, fluffy love story that made me laugh, swoon and tear up. Definitely a book I will be re-reading soon!