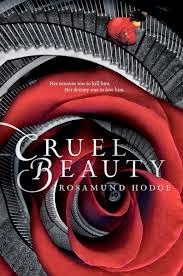 Based on the classic fairy tale Beauty and the Beast, Cruel Beauty is a dazzling love story about our deepest desires and their power to change our destiny.Since birth, Nyx has been betrothed to the evil ruler of her kingdom-all because of a foolish bargain struck by her father. And since birth, she has been in training to kill him.With no choice but to fulfill her duty, Nyx resents her family for never trying to save her and hates herself for wanting to escape her fate. Still, on her seventeenth birthday, Nyx abandons everything she's ever known to marry the all-powerful, immortal Ignifex. Her plan? Seduce him, destroy his enchanted castle, and break the nine-hundred-year-old curse he put on her people.But Ignifex is not at all what Nyx expected. The strangely charming lord beguiles her, and his castle-a shifting maze of magical rooms-enthralls her.As Nyx searches for a way to free her homeland by uncovering Ignifex's secrets, she finds herself unwillingly drawn to him. Even if she could bring herself to love her sworn enemy, how can she refuse her duty to kill him? With time running out, Nyx must decide what is more important: the future of her kingdom, or the man she was never supposed to love


You know when you're scrolling through amazon and you come across this gorgeous book and you don't even care what it's about because the cover is just so beautiful? This was one of those times.

Yes this was a cover buy. I am not ashamed to say it. We've all been there. And when I found out it was also a Beauty and the Beast retelling I was over the top excited to jump into it. But, unfortunately, in many coverbuys you tend to think that the content will match the exterior and most times you end up disappointed. This was also one of those times.

I can't say that I didn't enjoy this book at all. It was somewhat entertaining, but the problems I had with it exceed the enjoyment. Some I could surpass and keep going but others I couldn't turn a blind eye to.

Nyx was one of them.

Nyx and I didn't get along well. At all.
She was one of the most impulsive and frustrating characters I've ever read about. She almost always acted before thinking and made so many stupid decisions. She was trained since the age of 9 on how to act around the Gentle Lord and from the second they met she did the complete opposite. She actually punched him! A man who could annihilate her with the snap of his fingers! But the most frustrating thing about her was that she didn't know where her loyalty lied and she showed no indication of development throughout the entire novel.

Another thing was the romance. There is a bit of a love triangle in this book but can't really get into it much because it's kind of a spoiler but I can tell you that the romance, for me, came out of nowhere and seemed forced. I liked the interactions between Ignifex and Nyx but overall it didn't really do anything for me.

A main problem was also that I didn't just dislike Nyx, I really found no connection with any of the characters. At the end of the day I didn't really care what happened to them. I did enjoy the world Rosamund Hodge created but it really wasn't enough for me to give it a higher rating when it was the only interesting thing in the book. The writing was also okay but the ending seemed a bit convenient.

Overall, Cruel Beauty wasn't anything special for me. In some aspects I guess it was kind of entertaining but I can't say I would recommend it to anyone.