Review :Sing Down the Stars by L.J Hatton 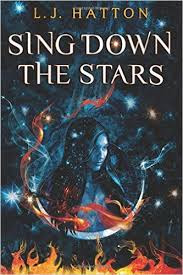 When the aliens came, they didn’t attack—they just hung in the sky. After a year of human hysteria, they left and the rains began. Ever since, some girls have been born with unusual abilities. The fifth daughter of Magnus Roma, creator of the extraordinary circus called The Show, Penn was born a Celestine: she can call down the stars. Her newborn cries brought burning hail that killed her twin brother. For sixteen years Penn has hidden her power by assuming the life of her twin, just as her four older sisters (who can manipulate the elements) have hidden from the Wardens’ Commission in plain sight as circus performers.Then, one explosive night, Penn loses everything. The wardens want to protect Earth from anything alien. Her sisters are taken, and The Show is destroyed. To save her family, Penn must do the unthinkable and use the power she’s been taught to suppress. She’ll travel to the very heart of her world’s darkness and discover the truth about her terrifying gift.

I received a digital copy of the book from Netgalley and the publisher in exchange for an honest review.

Sing Down the Stars was an amazing and well-written book. I really liked the plot and how it had enough twists and turns to keep me interested for its entire duration.

It centres around Penn, the daughter of the ringmaster (and creator) of a famous Circus, the Show, and a girl with the ability to sing down the stars, literally. That is the aftermath of an alien invasion that caused a lot of children, especially girls, to be born with special abilities. These children, though, are chased by the Comission and when Penn's Father suddenly disappears and the Circus is attacked, she and her friends must go on the running seeking the only safe place for them, the Hollow.

I loved how action-packed and fast paced this book was! There wasn't a moment where I thought the plot was going too slow or that nothing was happening. I was also fascinated by this world, where everyone had chosen to take a step back to the past, fake Victorian as the book says, because most now feared technology.

Penn, was also a very nice character to read about. She's definitely strong, and driven by her will to protect her friends and family. But, she's also very reckless and impatient which makes for a bad combination. There were moments that I loved her character and others where I was really frustrated with her.

Lastly, the romance wasn't really anything special. It was there, but I realised at the end of the book, that I hadn't really noticed it much and it also came out of nowhere at some points, like the author had remembered that Penn has a love interest so she would briefly mention him in a paragraph and then continue on.

Overall, Sing Down the Stars was a really fun and quick read. It had its flaws but you should really pick it up if you're in the mood for fantasy/science-fiction.